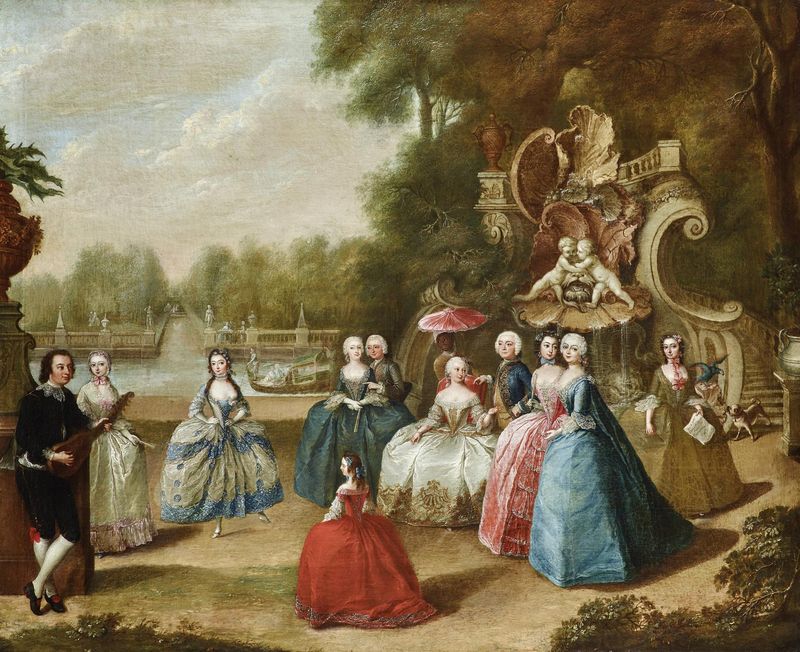 "Frederick Henry, Margrave of Brandenburg-Schwedt with his Wife

Leopoldine Marie of Anhalt-Dessau, Members of their Household,

Dancing Barbarina and the Self-portrait of the Painter"

The gallant scene shows a courtly party in the midst of a park with a water basin and a large rococo fountain. Margrave Frederick Henry of Brandenburg-Schwedt (1709 - 1788), a cousin of King Frederick the Great of Prussia, stands, clad in a blue coat, right next to the central chair, on which his wife Leopoldine Marie of Anhalt-Dessau (1716 - 1782) has settled down, wearing a magnifcent white robe with gold embroidery.

Together with members of their household they enjoy a dance performance of the fa- mous ballerina Barbara Campanini (1721 - 1799), shown third from the left in a white and blue dress. After her meteoric career on the opera stages in London and Paris, the young Italian was considered the best ballet dancer in Europe. Between 1744 and 1749, "The Barbarina" was the most celebrated star and the highest paid artist of the Royal Court Opera in Berlin, and an infuential protagonist of social life in the Prussian capital.

The representative piece was created by the exceptional painter Barbara Rosina de Gasc, neé Lisiewska, widowed Matthieu (1713-1783), who portrayed herself on the far right, in a light brown dress and pen and paper in her hands. As the daughter of the Prussian court painter Georg Lisiewski, wife of painter David Matthieu, also employed at the Prussian court, and step-mother of the famous engraver and portraitist Georg David Matthieu, Barbara Rosina was one of the few professional female painters of the 18th century.

Trained by Antoine Pesne in Berlin, the talents of the gifted portraitist Barbara Rosina were highly valued in aristocratic circles. She worked, for example, at the court of the Prince of Anhalt-Zerbst, and was court painter of the Duchess Philippine Charlotte of Brunswick-Wolfenbüttel, a sister of Frederick the Great. Furthermore she was the frst female painter to be an honorary member of the Dresden Academy of Fine Arts. Among the numerous portraits of members of the European nobility, which she created in the course of her life, is also the famous large-sized double portrait from 1756, depicting the Russian Grand Duke Peter III. and his wife Catherine II., later known as Empress Catherine the Great (now in the Swedish National Museum Stockholm).

Zügel, Heinrich Johann von-Schafherde with her shepherd at the gate

Ziem, Félix François Georges Philibert-Gondel and fishing boats in the lagoon of Venice

Portrait of Philipp Melanchthon - Lucas Cranach the Elder and Workshop

A pair of landscape paintings

Portrait of an elegant lady