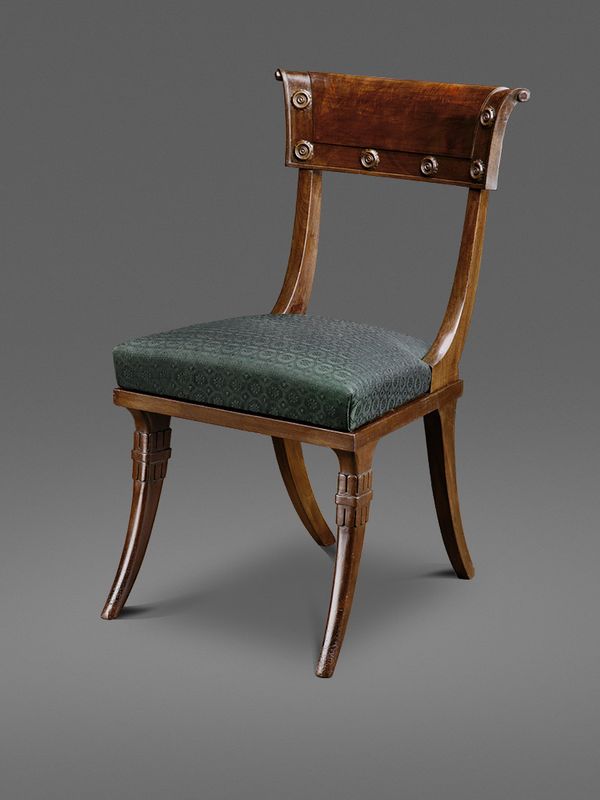 Solid mahogany and veneer, with stylized carvings on the front, saber-shaped legs, the transverse board of the trapezoidal backrest with applied rosettes and elegantly backward-turned, volute scrolls as the upper part completion. Padded according to the historical model and with renewed, green horsehair covers. The chairs look very filigree in their construction and were an appealing part of the furniture in an elegant salon.

The front of the two corner cupboards is structured architecturally. The middle part is formed like an avant-corps and flanked by fluted pilasters. The drawers can be opened by a hidden mechanism with a push button - a sophistication that Kroll learned during his training in the manufactory of David Roentgen.

At first glance, the very austere cabinet captivates with the contrast between the linear, profiled fillings and playfully carved details such as the open-worked rocailles at the cornice, the volute feet of the upper cupboard section and the slightly curved front of the chest of drawers.

The free-standing small piece of furniture bears testimony to the close relations between Italian and French carpentry.

The simple, elegant form and the exact and elaborate veneer design on all sides emphasize the coloration and grain of the exotic woods that were processed here.

Rose wood and king wood as well as satiné and maple.

The framing is extraordinarily plastic carved with moving, pierced rocailles, Angels' heads and animal figures One of flanked by flaming torches, the female bust forms the high-sided crowning.

The vividly patterned marble top is supported by intricately carved legs on goat feet. Original version in green and gold.

Dainty furniture like this little, three-pupil Commedia with leather-covered writing tablet and surrounding, open gallery have always been extraordinarily popular and were used for the storage of writing or sewing kit in a tastefully furnished Salon.

Rosewood and rosewood veneered, with the original Bronze and marble top.

Kimmel worked after his apprenticeship in Zittau for six years at the Imperial Court in Vienna. In Dresden he was for the court carpenter Peter Hesse and Johann Petany. Hesse always emphasized the exceptional quality of his work and his knowledge of both English and French cabinetmaking, and so Kimmel was hired as a royal cabinet maker in 1751.

A Kimmel writing cabinet from the former collection of Baron Mayer de Rothschild, decorated all over with fittings and mother-of-pearl inlays but identical in basic form, is now in the Victoria & Albert Museum (inv. no. W.63-1977).

Behind the doors of the attachment there are numerous Compartments and drawers for storing letters, Documents and writing utensils. The refinement of the hiding places reveals the masterly Handwriting of the courtebenist Michael Kimmel.

Walnut and walnut burl veneered with band inlays and profile edges in olive and elm, which are Drawers in alder. Chased and gold-plated Brass fittings.

With this courtly chest of drawers with elaborate carved frame and elegantly curved front, the fittings harmonise perfectly with the the selected veneer pattern from walnut and

The high quality, open-worked Bronze fittings probably originate from the Workshop of Johann Georg Oegg (1703-1782), since 1733 prince-bishop court locksmith. Oegg manufactured not only ornamental grids and gates for the courtyard garden and the outer front, but carried with artful Wall and ceiling chandeliers, fireplace grills and fittings also play a decisive role in interior decoration to the residence.

Johann Kroll, who was born in Riga, had been learning in the Roentgen workshop since 1779.With the permission of David Roentgen, he later set up his own business and in 1781 received an order from the Elector of Mainz, Friedrich Karl von Erthal, for a cabinet furniture with a built-in clock.In 1783-84 he delivered a larger ensemble to Schloss Johannisburg in Aschaffenburg.

The front of the semicircular, three-door body is structured by protruding, fluted pilasters.The gilded strips and finely chiseled rosettes set further elegant accents.The extraordinarily harmonious design of the half cabinet refers to the creation under the influence of David Roentgen.

The graceful, two-part corpus with the accentuated Eckstollen is extraordinarily richly decorated.

On the sides and fronts of the drawers are large floral inlays which are are complemented by the magnificent, fire-gilded Fittings.

Rose and king wood veneered, the inlays in maple and boxwood partly engraved, coloured or shaded by fire.