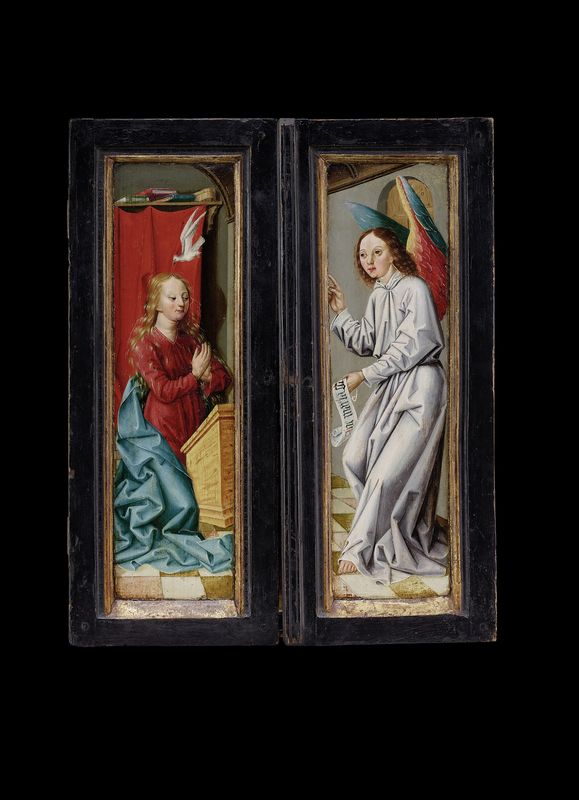 Triptych „Virgin and Child“ - Circle of Friedrich and Michael Pacher

Central panel: The Virgin and Child with musical angels;

the outer faces: The Annunciation; inscribed on the outer wing

The triptych with the central motif of Virgin and Child, flanked by two angels playing music and the Saints Catherine and Barbara, was created around 1475 in the circle of the South Tyrol artists Friedrich and Michael Pacher. The small, representative work with its precious gold ground served as a house altar for private devotion.

Positioned in the center is Mary, who keeps her son, who has already grown up beyond early infancy, on her lap. The little Jesus leafs through his mother's prayer book in a playful way, providing a charming image of lively toddler behavior. This composition is based on the so-called Durán Madonna by Rogier van der Weyden (today in the Museo Nacional del Prado, Madrid), which was created around 1435-1438 and quickly became widespread among the artists of the era through circulating pattern drawings and later copies.

The creator of the winged altar presented here has probably also used one of these highly popular templates, as an examination of the underdrawing suggests. A comparative analysis of other works that relate to Rogier's image creation suggests that the painter of this triptych used a follow-up version of the Durán Madonna as a model, which must have met the original in many details (see Achim Simon, 2002).

The not yet identified artist, however, by no means simply copied the image motif, but confidently translated it into his own style, which was strongly influenced by Friedrich and Michael Pacher. In doing so, he essentially implemented his own creative ideas. While for instance in Rogier's composition both mother and son are looking at the prayer book, in this triptych Christ actively seeks his mother's eyes, as if to make sure that his play with the book is allowed by Mary. This exchange of glances accentuates the natural innocence of the small child and at the same time emphasizes the deep bond between mother and son.

The inner faces of the wings depict on the left St. Catherine with her instruments of torture, the wheel and sword, and on the right St. Barbara with the martyr's palm and the attribute of the Eucharistic chalice and Host, which from the second half of the 15th century on increasingly supplemented, or, as in this case, even replaced the tower traditionally associated with her. The two Holy Virgins belong to the circle of the "Fourteen Holy Helpers", who were particularly venerated in the late medieval and early modern period. Among other things, St. Barbara was invoked for her protection against an unexpected death. St. Catherine was believed to be an intercessor of girls and women and patroness of schools and universities.

The facial features of mother and child, but also of the two saints, are reminiscent of South Tyrolean works from the sphere of influence of Michael Pacher. Also the frail, almost skinny infant Jesus corresponds to a type common in Tyrol. In contrast, the clearly structured execution of the body proportions, in particular the distinct plasticity and static attitude of the female saints, points to the Flemish influence through the popular antetype.

When closed, the triptych shows an Annunciation scene, which stylistically indicates a Tyrolean origin even more strongly than the motifs on the inside. Mary kneels at the prie-dieu, her gaze lowered humbly, while the ageless Archangel Gabriel, his right hand pointing to the Holy Spirit, delivers the good news to her. The fine hair and the round face with a high forehead give the Virgin an aura of youthful innocence, while the voluminous folds of her blue cloak emphasize her royal dignity.

The iconographic topics of Virgin and Child, the female saints and the Annunciation to Mary are not only thematically, but also in their artistic implementation characterised by a feminine tenderness. So it seems likely that the work could have been commissioned by a woman.

This makes the small triptych not only an impressive testimony of personal piety in the late Middle Ages, but also a vivid example of the lively exchange and the widespread dissemination of artistic ideas within Europe.

Ziem, Félix François Georges Philibert-Gondel and fishing boats in the lagoon of Venice

Virgin Mary with Christ and the Infant Saint John framed by a flower wreath. Around 1640 - Cornelis Schut the Elder and Daniel Seghers

Portrait of Philipp Melanchthon - Lucas Cranach the Elder and Workshop

A pair of landscape paintings - Johannes Janson - signed and "1778" dated