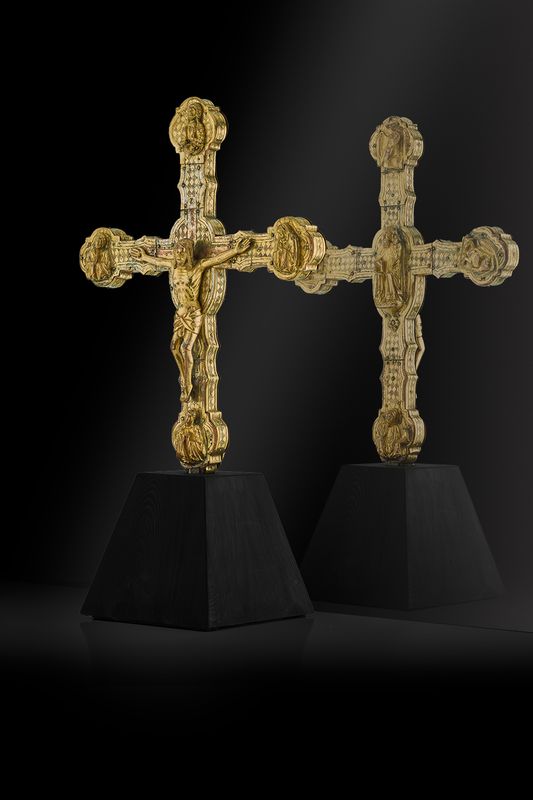 Mounted on wood core with embossed, engraved and gilded copper.

The cross has been the central symbol of Christianity since the early Middle Ages and follows a fixed iconographic imagery. The crucified one in the center is depicted in the three-nail type, on the curved ends of the cross reliefs of God the Father, Mary, Johannes and Mary Magdalene are applied and, on the back, the blessing God the Father is surrounded by the symbols of the four evangelists at the ends of the cross arms.

During processions, pilgrimages or solemn entries to Holy Mass, precious crosses like this one were carried on poles and placed near the altar so that they could be seen by all believers during mass. Even in private, festively decorated living rooms, crosses of this high quality were used as blessing and devotional crosses and are rarely so well preserved.

Master Johann Christian Wentzinger (1710-1797), who is considered one of the most important sculptors from Baden of the Rococo period.

He created numerous altarpieces, choir stalls, baptismal fonts and tombs in the Freiburg area. For some years he worked at the cathedral in St. Gallen.

On the richly structured pedestal with acanthus leaves, a rock crystal and a putto head, the Madonna is standing in a dynamically draped garment on the globe with the snake.

The expert mastery of the technique of the Bas-relief shows itself in the extraordinary three-dimensional effect of the representation. This is illustrated by the exact, perspectival representation of the building in the background as well as in the richly draped, often overlapping robes of the

figures in the foreground.

Cast bronze, with a wonderfully preserved,

Elaborately Inlaid Casket - Ansbach, around 1750 - from the workshop of the Ansbach court ébéniste Martin Schuhmacher (mentioned from 1720-1781)

From the workshop of the Ansbach court ébéniste Martin Schuhmacher (mentioned from 1720-1781).

The masterfully crafted casket is adorned on the sides as well as on the domed lid with extremely fine and lifelike bouquets with tulips, carnations, lilies of the valley, narcissus and other blossoms, held together by artful bows.

Walnut wood, maple and other woods, some of which are coloured; shaded and engraved details.

A highly elegant pair of Classicist Girandoles - Paris, circa 1790

On a pedestal with partly figural, openwork appliqués, a slender vase with ornamental handles held by birds, on each side carries the five-flamed candelabrum with the centrally raised spout.

With Gotzkowsky-relief-decor and fine flower bouquets,

knob and handle of the tureen with plastic vegetables and citrus fruits. Very good preservation.

(1710-1775). Gotzkowsky, who later founded the Königliche Porzellan-Manufaktur Berlin (KPM), was purveyor to the court of Frederick the Great.

Diameter of the plate 37 cm,

Possibly the order to the later chandeliers took place on the occasion of the birth of more children. The engraving

on the underside of which reads "Von ausgezupftem

or other personal treasures, inlaid or

with a portrait medallion on the drawer

and a bouquet of flowers on the flap.

A PARIS", engraved on the plate "Duval A

movements for precious and precious watches, among other things.

Housing from Saint-Germain, Morlay or Osmond.

with the movement is written on the original